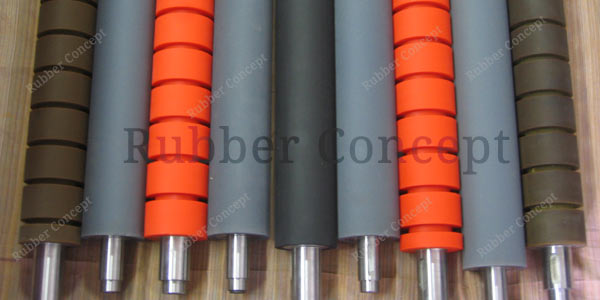 How Rubber Rollers Are Manufactured?


When we wants to understand Manufacturing Process of Rubber Roller. We have to first learn What is Rubber Roller?
Rubber rollers are basically, rubber covered metal pipes, which are used for various industrial applications such as conveying, printing, lamination, sealing etc. Depending on the application requirement, rubber and metal material is selected and material undergoes following steps to make effective rubber roller for the said application.

The process of Rubber Roll Manufacturing is consisting of four major steps:

Preparation of Core and Rubber to Metal bonding:

Excellent adhesion between rubber and core is decisively important to the satisfactory performance of most rubber rolls. Irrespective of the method of bonding, the core must be suitably prepared.

The first step of core preparation is to expose the cores to steam at about 150°C for several hours. Though this is not performed by many manufacturer, due to economic reasons, this removes the anticorrosive materials applied on new cores, which are normally roughly machined. Although light metal cores are not protected by an anticorrosive agent, their surfaces are slightly more porous than steel cores and should also be cleaned with steam. Any deeply cut grooves should be machined off the core before the steam treatment; this is to avoid the increased risk of trapping air between the core and the rubber covering when the latter is applied. In the case of used metal rolls, the old rubber covers are removed on a lathe or, less frequently, by burning off.

After this preliminary cleaning, the cores are sandblasted to produce a virgin metal surface that is free from rust and scale and also to increase the surface area for better bonding. If the first step of steam heating is skipped, sandblasting ensures good bonding between metal and rubber.

Finally, the cores are cleaned with a solvent to remove any trace of oil and grease.

The prepared core is applied with bonding agent as soon as possible, to avoid re-oxidation of the surfaces.

In the manufacture of rolls, good rubber-to-metal bonding is ensured by two methods: chemical bonding agents and use of an ebonite base layer.

Chemical bonding agents offer short curing times (unlike ebonite) and give high adhesion values even at elevated temperatures (contrary to ebonite bonding, which begins to soften at a relatively low temperature: ~ 70-80°C). Chemical bonding agents are, however, somewhat sensitive to mechanical influences. If rolls, particularly those having a relatively thick rubber cover, are subjected to dynamic stresses, the increasing shear forces may cause the cover to break loose in the course of time.

Ebonite tie stock is sometimes preferred, especially when the rolls have a thick rubber covering and are subjected to heavy dynamic stresses. Nowadays small and medium-sized rolls are almost exclusively produced with chemical bonding agents. Ebonite offers very high separation strength and the rubber covering undergoes little deflection, since up to a quarter of it may consist of ebonite, which has little tendency to be deformed.

When using an ebonite bonding system, that the soft rubber cover should not be allowed to over-cure (since the cure time of ebonite is long), and care should be taken to ensure that the ebonite is cured to the optimum (since adhesion is unsatisfactory when a sufficiently high degree of cure is not attained). Furthermore, pronounced sulfur migration occurs between the ebonite and the soft rubber in the case of over-cure, leading to the formation of a thin layer of semihard rubber at the interface between the ebonite and the soft rubber; such semihard rubber has unsatisfactory mechanical properties and frequently results in failure between the two materials.

An additional tie stock is generally used to absorb the migrating sulfur without impairing its mechanical properties, to avoid such adhesion failure between ebonite and soft rubber layers.

In the ebonite bonding system, the core is given two or three coats of an ebonite solution, each coat being allowed to dry before the next is applied. This series is followed by covering with a layer of ebonite approximately 1 mm thick.

Rubber cover compound 1.0-1.5 mm thick taken from a calender is passed through cooling drums, then wound with a liner (normally polyethylene sheet). Such thin sheets are preferred because they can be removed from the calender without forming air bubbles. The cover sheet is next applied over the core, mostly using hand rollers, until the built-up diameter is roughly 4-6 mm greater than the desired finished diameter of the rubber roll. During application of the sheet, some solvent wiping is carried out in case the compound does not have sufficient building tack. Sufficient care is taken to ensure that solvent is fully evaporated before plying up. Alternatively, such sheets can be warmed by passing over hot platens or by heating with an infrared bulb for reviving the tack of the compound.

Plying of extruded sheeting is better than plying of calendered sheeting in some respects because the sheet coming out of the extruder is free from blisters. Such blister-free sheets can be used much thicker (usually in the range of 4-8 mm), thereby reducing the building time. Furthermore the hot sheet is used directly in the plying-up operation. The core is rotated in such a way that its surface speed is always similar to that of the extrudate, which is squeezed over the rotating core by an adjustable press roll placed vertically above the core. Normally 20-30 cm extruders are used with fishtail head and roller head dies. This process is quite fast, but only comparatively short rollers can be covered because of the machine limitation.

In another method of roll covering, an uncured rubber tube, prepared by extrusion, is put on the core. In a modification of this process, cured tubes of correct outer diameter are then put on the core, using a special type of bonding agent (post-vulcanization bonding), which eliminates the need for any further grinding or finishing. The process is now limited to small rollers, where pressure on the rolls is not high.

Whatever method is employed for building, the built-up cover is made slightly larger than the final design dimensions, to compensate for the grinding operation to follow. Furthermore, the thickness at the middle (where wrapping is commenced) and also at the ends is made a few centimeters higher, which serves to compensate for the flow of rubber during wrapping.

The built-up roll is next wrapped, either in a lathe or by the build-up machine, to prevent sagging and porosity. The wrapping is wound as tightly as possible from the center to one of the ends, back to the other end, and then to the center again. To ensure the necessary pressure, a particularly narrow fabric strip (~ 25 mm wide) is used for the first wrapping. Then several more wrappings are made as tightly as possible, this time with a particularly broad tape.

Cotton is the most widely used material for tapes. The pressure exerted on the cover by a cotton tape can be increased by wetting the cotton tape and winding it on in the wet state, to take advantage of the shrinkage that occurs as the tape dries. Currently nylon and polyester tapes are popular because of the number of times they can be reused.